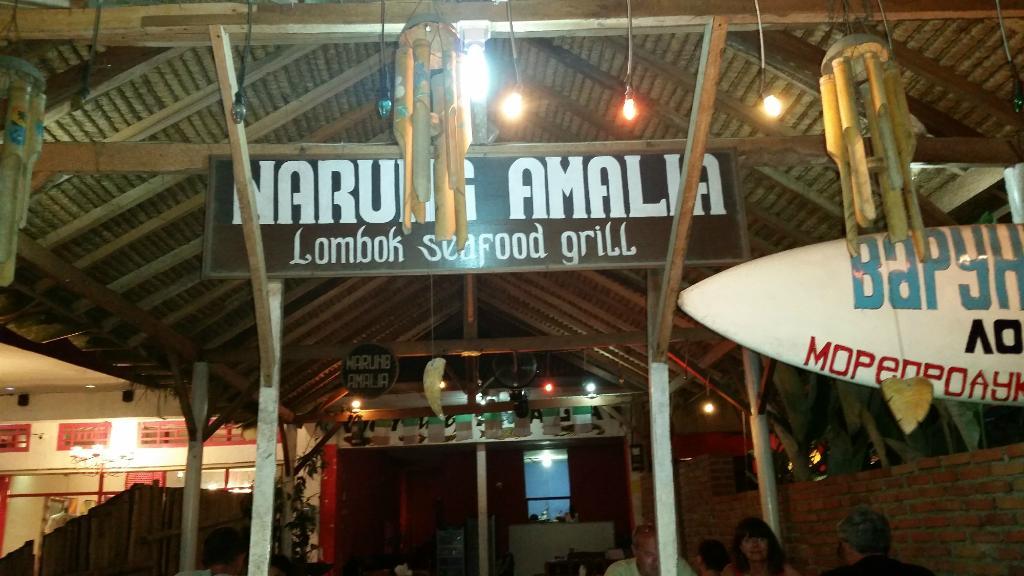 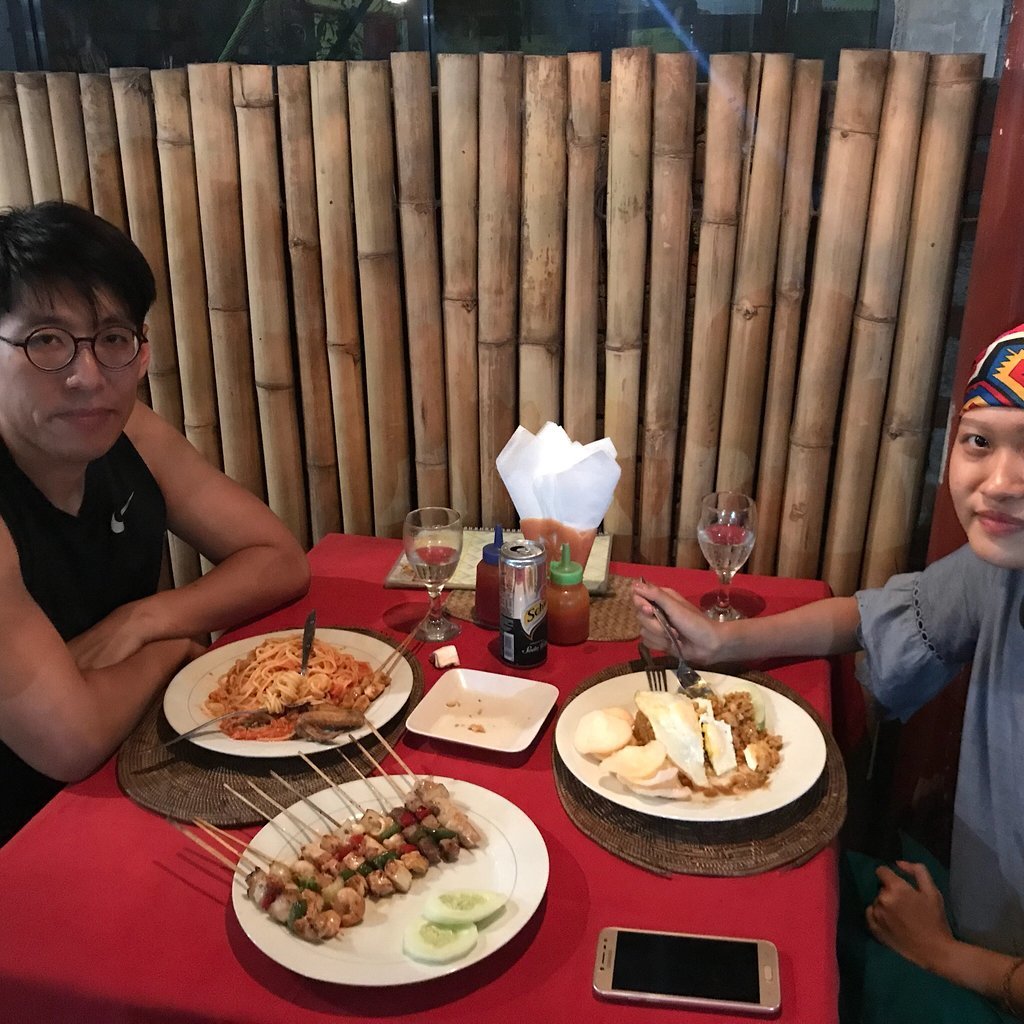 Cheap food, most of it tasty. Service and the place itself could need some improvement (the young girl is not very friendly). Just expect a basic dinner and you'll be satisfied. Pasta was good, tempeh goreng very good, fried eggplant inedible (we complained and didn't pay for it). Maybe you need a bit of luck eating here...

Excellent Food recommend Restaurant one of the best in Sengiigi Beach

Quality of the food is every time at the top. Italian style made from Indoneisan hands. Perfect grilled fish and squid!!

Absolutely fantastic food!! Reasonable prices, the mixed satay and whole fish is a must. Byo alcohol.

Not very good Indonesian food, staff are really friendly but I was very disappointed with my Lombok style grilled chicken. It tasted like it had been cooked for an eternity into a rubber textured mess. My girlfriend ordered lemon squid and was about 90% very thick cut red chilled (not mentioned on the menu) mango juice was good but asked for no sugar and it still came with sugar (it had granulated sugar at the bottom of the glass)

Very nice place, we had a great grill barracuda. The staff were nice and they were quite fast serving the tables. Just note they don't serve beers.

Nice grilled fish and affordable price. Better go early because there are only several tables and owner had to refuse several guests due to limited supply.

Amazing food and really cheap! Got garlic bread, mie goreng, satay sticks and three Cokes for 100,000rph. Definitely worth a visit for some tasty local food!!!!

Very yummy fresh grilled fish and fruit juice!! One fish costs IDR70k and u can choose either less spicy or very spicy! Other dishes are good too!!

The food was amazing. We paid 150 for this large white snapper (plenty of food for 2 people) and it was perfectly cooked. The service was slightly slow, but it was the celebration on the last day of Ramadan and everywhere else was closed. The owner even went to the store for us for more beer when he ran out. We definitely suggest to eat here. The regular menu prices were from 35,000 to 50,000 for seafood and regular dishes.

A bit expensive for a local... It's more like jakarta price tag... Have an average taste for food...

Not expensive and tasty. We had 2 dinners here. The grilled calamari is good. They do not serve alcohol here but you can bring your own (no additional charges).

Food takes way too long. Drinks are not cool. And waitress not committed. All in all not a good experience.

If you're looking for authentic local food in a local warung, then hit up Amalia (named after their daughter) for delicious local food.I'm not a fan of hot spicy food and these guys catered to my soft palette.They were friendly and polite. The food came out in reasonable time. I give it five stars for a local warung who are in an easy to get to location with amazing almost local prices.The king prawns were amazing, smokey with just the right amount of heating that allowed them to be pulled right out.As with anywhere, if you're not a hot spicy fan, learn the words, "tidak pidas".Enjoy!!!

Good and quite cheap.

Very delicious food, especially the grilled prawns was fantastic. Anyway be patient because it is always overbooked due the good quality and cheap price. We loved it😇

Cheap,local food. We had nasi goreng amelia, fried bread with shrimp and seafood salad. All was delicious and well cooked. For the two appetizers, two juices and two main courses we paid 115.000 rupiah.

Cheap and good, but the guy there was kind of unfriendly even when we tried to smile a lot...

Excellent authentic restaurant with good food for good prices. You should absolutely try!

We went there almost every night during our stay!The local food can be very spicy (if you require ) especially if you order the boiled water spinach with Lombok sauce!

Good food for a affordable price!

The food price is quite cheap and the location is on the busy road of Senggigi.We order Spaghetti and the fampus Ayam Taliwang. The Spaghetti taste is not so good, its very Indonesian. The Ayam Taliwang is really hard to bite, almost imposible to be eaten, even though the spices and taste are delicious.The service is very friendly, yet after We complain the owner just said Sorry.

You must try riconada prawn. Prawn mixed with paprika, milk sauce, and other vegetables. Nice place also for family at affordable prices.

Rather unfresh, bad taste, but still not rotten, grilled fish, accompanied by cooked, yes frozen veggies, and french fries (asked few times if "fried potatoes" that had been offered are really fried potatoes (affirmative) or still french fries..) Tried to charge 100k , upon rejection of dish only 50k.The flavor of fish was very "unfresh", as it was stored frozen for ages (and it surely was), they branded fish as "groped", it tasted and has a texture already more like meat, than a fish.But, I should say, this a typical flavor of Indonesian cuisine for fish - same in Sheraton, same on Belitung island where I spent few weeks - not a single time I had in any non-touristy establishment a fish that would taste fresh and has a texture of a fresh fish.Unfortunately, that means you should avoid local warungs for meals and go to westernized places.

Had the grilled prawns.so yummy.and the sambal is to die for!😍

Good food at reasonable price. The satay and sauce taste great. And so is their grilled fish. Their gado-gado could be better though. Overall an excellent eatery along senggigi road.

Very nice staff. Good for not expensive dinner every day. Some dishes are delicious but deep fried chicken was fried to the bones, not too much meet.

Would have taken more photos but got so involved in feasting I forgot to take any more. The service was quick, the food exceptional and the price unbelievably low. Well worth a visit

This place is quite a gem. Doesn't look like much from the exterior but the food is amazing and so reasonable! We ordered the famous ayam taliwang, gado gado, plecing kangkung and a super sized grilled fish (good for 4) with steamed rice. The total bill came up to only S$32! Fantastic meal. The fish was a real winner, chargrilled to perfection, tasty and fresh! They were pretty popular and all the tables were taken in no time. Best to make a reservation if you plan to go during peak dinner hours.

Total spent for 4 gals idr477,000. Pics as below on what we ordered. Prawns are so so good! Just look at the picture! Food is great and the service is friendly. Definitely will come back

This place is great. Food is cheap, fresh and service great. Make sure you try the lobster.

Your question has been sent.

Your review has been submitted.

Want to order over the phone?

Thank you for being with us!

We will call you back!